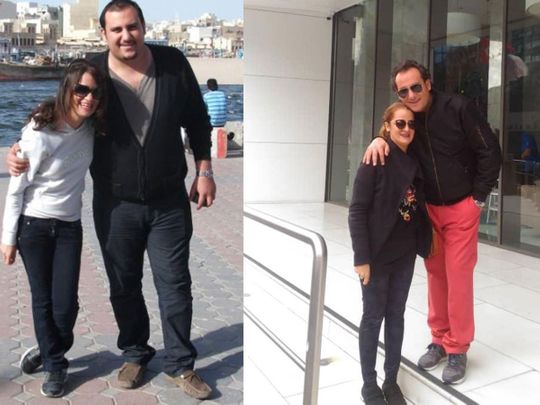 Sina with his wife Sahar before (left) and after Image Credit: Supplied

Also in this package

“I used to order a pizza [combo] and I used to eat all of this pizza package as breakfast and then eat lunch and dinner,” recalls Sina Shapour about the old days.

Nine years ago, a couple of years into his move to the UAE - he is from Iran - the 6-foot-2-inch expat was determined. He says the peace UAE offered gave him the impetus to change.

Fortunately, help was at hand. “I decided with the help of my wife, who is a swimming coach [to get fit],” he says.

“When we started it was a very tough time because I was an eating person….so [when I] suddenly stopped these things, I switched to sport…it was very difficult."

Shapour also put aside his cravings of pizzas, burgers and biryani - for eight months, he says, “I used to eat only salads.”

“My wife was supporting me and encouraging me,” he explains - from buying nutritious groceries to tweaking her own diet, she helped him get around his need for calorific food.

“And it’s the environment around me that kept me going,” Shapour insists. There are so many fit people around in the UAE; they care about their health and work at staying fit. It is inspiring.

Shapour also worked out a two-hour exercise plan. “From that day to today,” he says, “[I spend] one hour running, one hour swimming. If I don’t do this, I don’t go to bed. During the pandemic, if there [was] no treadmill [because the gyms were closed] I [did the exercise] in the house. I have a swimming pool at home,” he says. “Whether I have a cold, or the flu, I do my workout. Seven days a week, two hours a day,” he says.

Shapour lost 45kg in that initial 8-month window; his metrics went back to normal. Nine years on, he’s kept it off by sticking to the same exercise regime. “Still, if I start eating I will gain weight - control is the key,” he says of his diet. ”90 per cent of my food is still vegetables and fruit.” If he feels like eating something decadent, he’ll eat a small portion - a few bites - to satisfy that craving. Those days of struggle, those memories of hunger have etched themselves into his memory. “I do not want to go back to that,” he explains.

“To me the most important thing is to have a healthy body,” he says. It helps with a healthy mind.

If you are more active, things will change for you, he explains. “In your personal life, in your job, when someone sees you look like a fit person they would like to know you too,” he adds.

He calls UAE the beautiful country that gave him time for self-reflection and peace of mind and his own space, which led to him changing his lifestyle.

“I lost weight without surgery, without an expensive operation or diet,” he says because he got something he needed to do it in the UAE. “My mind [was] in a peaceful environment and then I did it.”

He’s also proud about the impact the couple’s fit lifestyle has had on his now seven-year-old daughter; she’s already swimming laps around her peers and taking home many trophies. It’s one small happy fit family.

5 The Top 10 Financial Mistakes for Young Couples to Avoid...