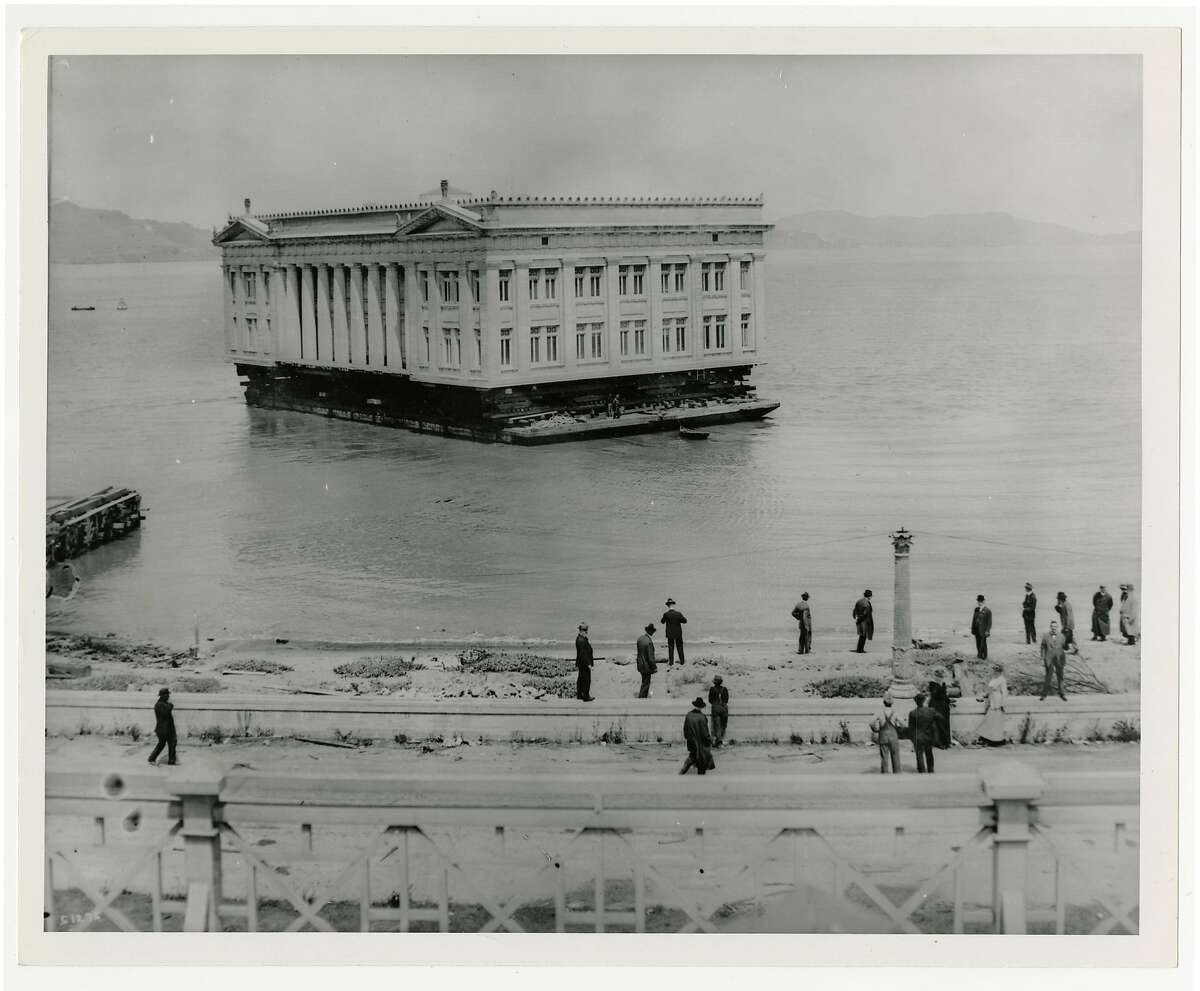 Moving a 139 year old home from around the corner at 807 Franklin St. to Fulton Street that weekend was the distraction San Francisco needed.

However, the joyous event that dominated social media on Sunday as crews cut down wires and cut trees on the side of the road to make the move easier is just a minor footnote in a city where moving gigantic buildings was the norm.

At some point in the 1940s and 1950s, moving was so frequent that three different companies in San Francisco were bidding for jobs. There were so many times, sometimes dozens of moves in a year, that a Victorian could stand on pads on the city flag.

With the help of San Francisco Heritage and OpenSFHistory at the Western Neighborhoods Project, we've collected some of the most iconic building moves in San Francisco's history. Here's a rough look back, starting with the largest.

Commerce High School was moved four blocks from Grove Street to a new home on Fell Street in 1913.Courtesy OpenSFHistory

The Newton J. Tharp Commercial School, a three-story steel and concrete building named after the city's architect who died while the school was being completed, was the largest high school in San Francisco when it was completed in 1909.

The problem: It was being built on Grove Street between Larkin and Polk, where the new Civic Center was planned. Four years after the building was built, the city paid more than $ 100,000 to move the 8,000-ton high school four blocks – an ice age on steel rollers that lasted more than seven months until it became its current home in the 170 Fell Street. It blocked entire streets for weeks, fueled lawsuits, and never traveled more than 25 feet in a day.

"The movers didn't even break a window," The Chronicle reported on November 13, 1913, when the trip was completed. "The plaster is cracked in some places and there is a tiny crack in the masonry in some places, but that's all."

The school was closed in the 1950s. And while it was damaged in the Loma Prieta earthquake in 1989, the structure still stands.

The Ohio Building, a copy of the state's Capitol Building, was one of many structures quickly constructed for the Panama-Pacific International Exhibition.

But like almost every building outside the Palace of Fine Arts, it had to be demolished or relocated for future construction of the Marina District. The 1,000-ton Ohio building, bought at auction for $ 1,000, was pulled to a barge on skids and shipped 23 miles to San Carlos on August 16, 1916.

It was first abandoned, served as a speakeasy during Prohibition, and was deliberately set on fire in 1956 to evict the property. 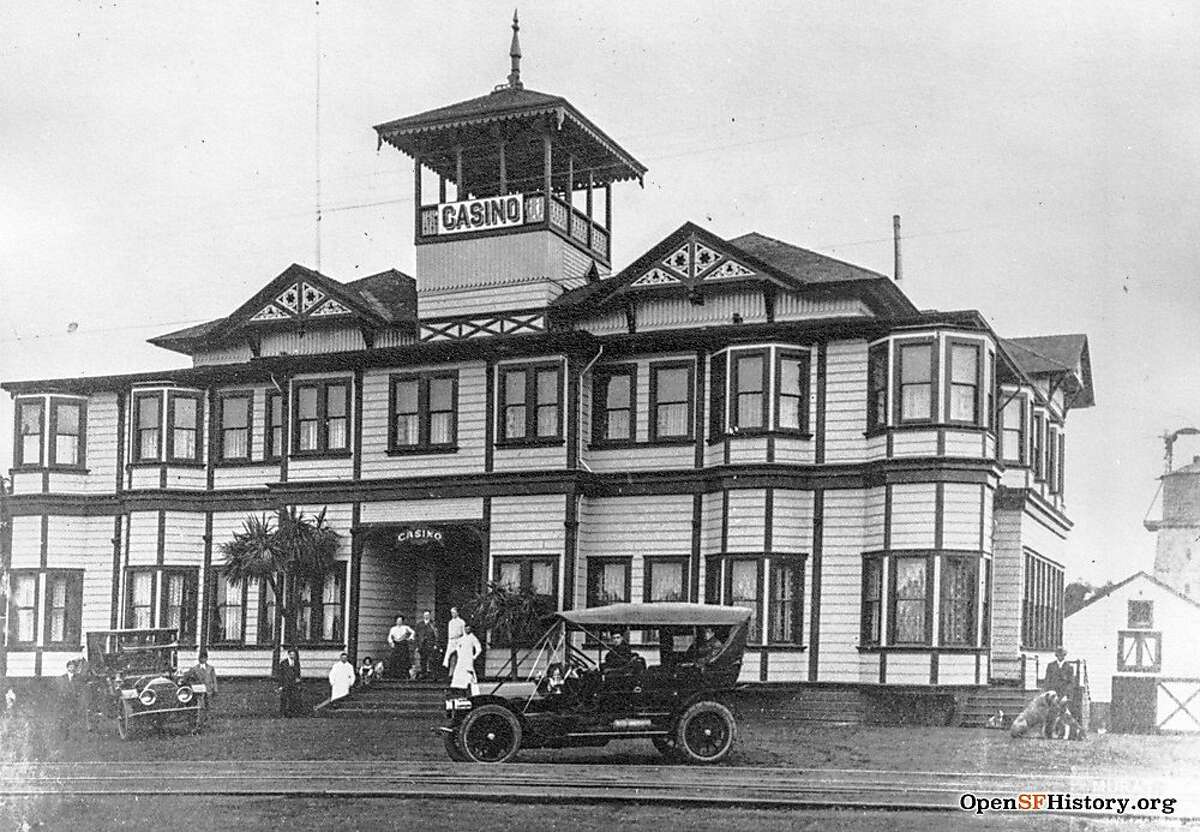 The Golden Gate Park Casino was moved out of the park in the 19th century and became a rest house on 24th Avenue and Fulton Street.Courtesy OpenHistorySF 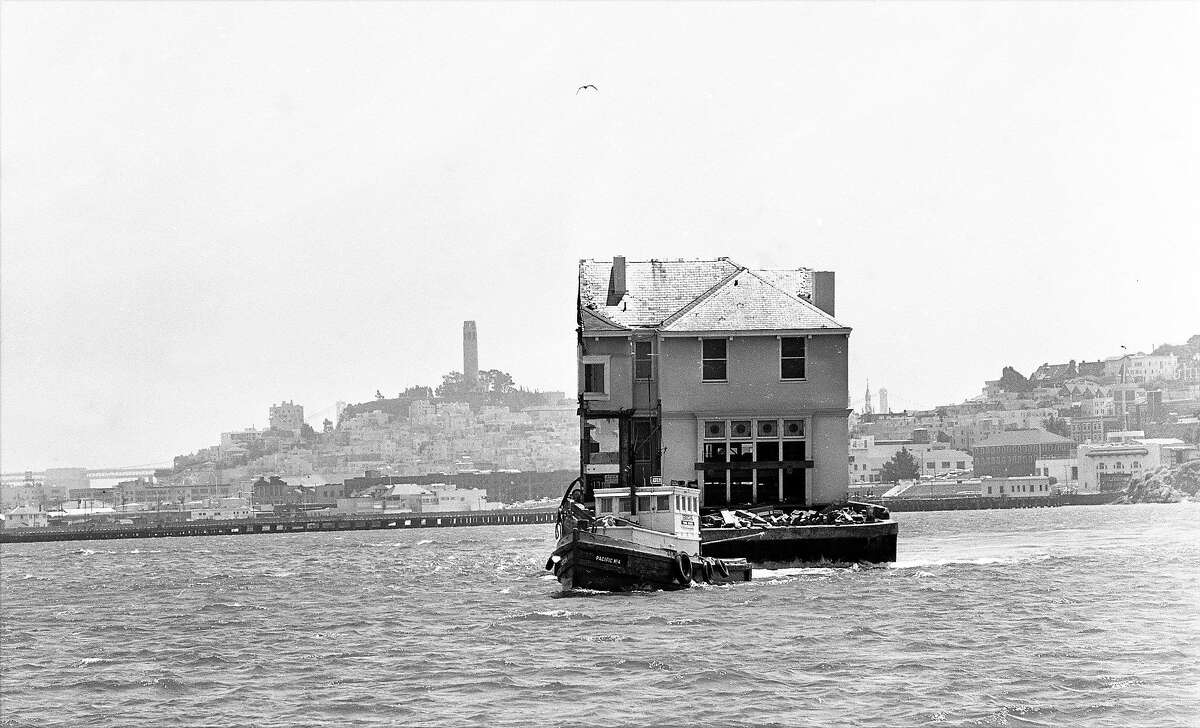 1from3July 3, 1962: A Pacific Heights mansion crosses San Francisco Bay to its new home in Belvedere. The Moffitt mansion was split in half and placed on a barge.Gordon Peters / The Chronicleshow moreShow less 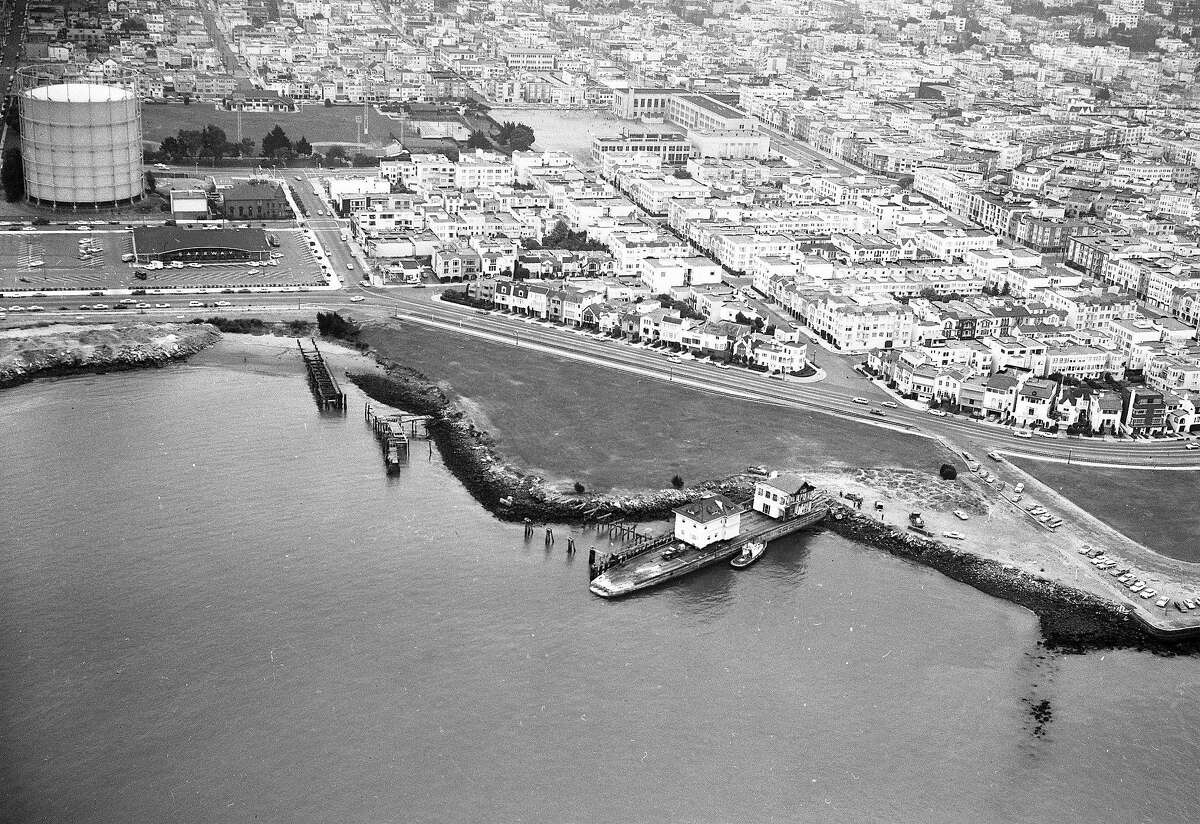 2from3July 3, 1962: A Pacific Heights mansion is loaded onto a barge for a ride across the bay to its new home in Belvedere. The house on 1818 Broadway in San Francisco was replaced with apartments.Duke Downey / The Chronicleshow moreShow less 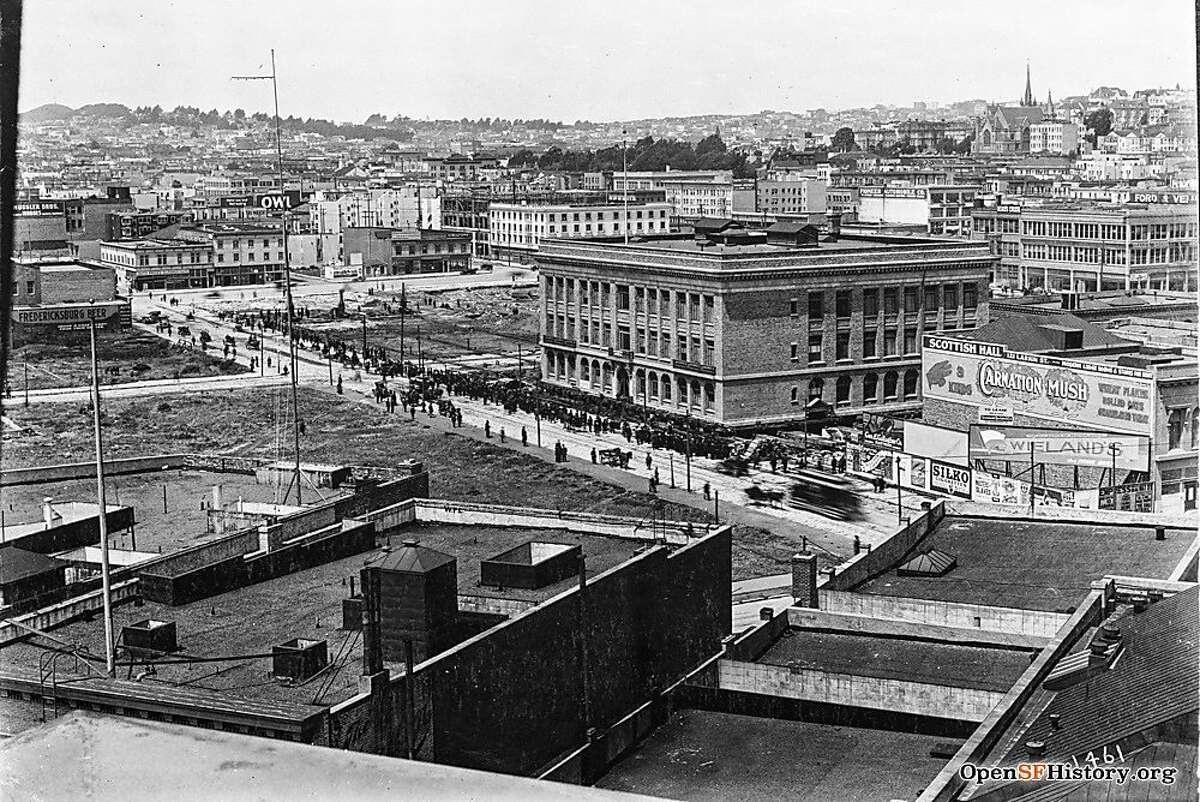 From the moment the Golden Gate Park Casino opened next to the Conservatory of Flowers in 1882, it contradicted the park's family-friendly atmosphere. So it was bought and moved 20 blocks to the corner of 24th Avenue and Fulton Streets in 1896.

In the early 1900s, the property thrived as an outpost for dancing and drinking, close enough to Golden Gate Park to attract park crowds but isolated enough for nightly parties. As recently as 1909, The Chronicle advertised the Roadhouse "open all night". For years, owner Carl Leonhardt was able to bypass the curfew by classifying the building as a hotel.

As the Richmond neighborhood grew around it, the place was demolished in 1922 for more housing. 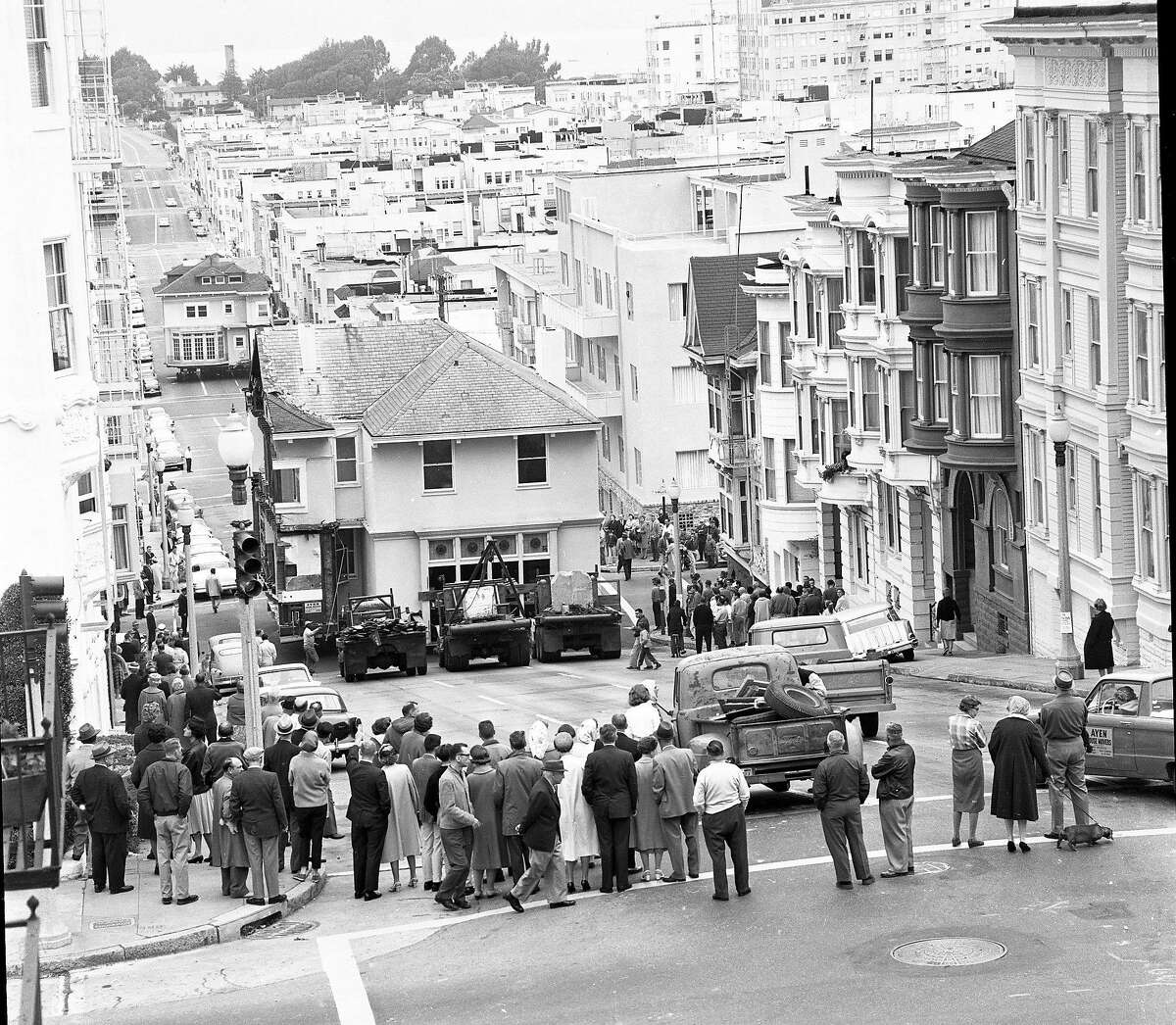 July 3, 1962: The Moffitt Mansion travels down Broadway and through the Marina District on its way to a barge. The Pacific Heights house floated across San Francisco Bay to its new home in Belvedere.Bob Campbell / The Chronicle

After World War II, residents of the city were used to seeing moving houses as developments such as the Broadway Tunnel, Central Freeway, and Interstate 280 resulted in entire neighborhoods being transformed in a short amount of time.

But the Moffitt Mansion's move in 1962 was a big event as the sleek house was chain-sawed in two 85-tonne pieces, pulled into the water by truck, and placed on a barge that crossed the bay to Belvedere. (Many more photos and details in this article on Chronicle 2020.)

The developers hoped the move would be the start of something big; Shipping villas across the bay and building high-rise buildings in their place. But while the Moffitt Mansion was a success – it's still in the Belvedere – it turned out to be unique. 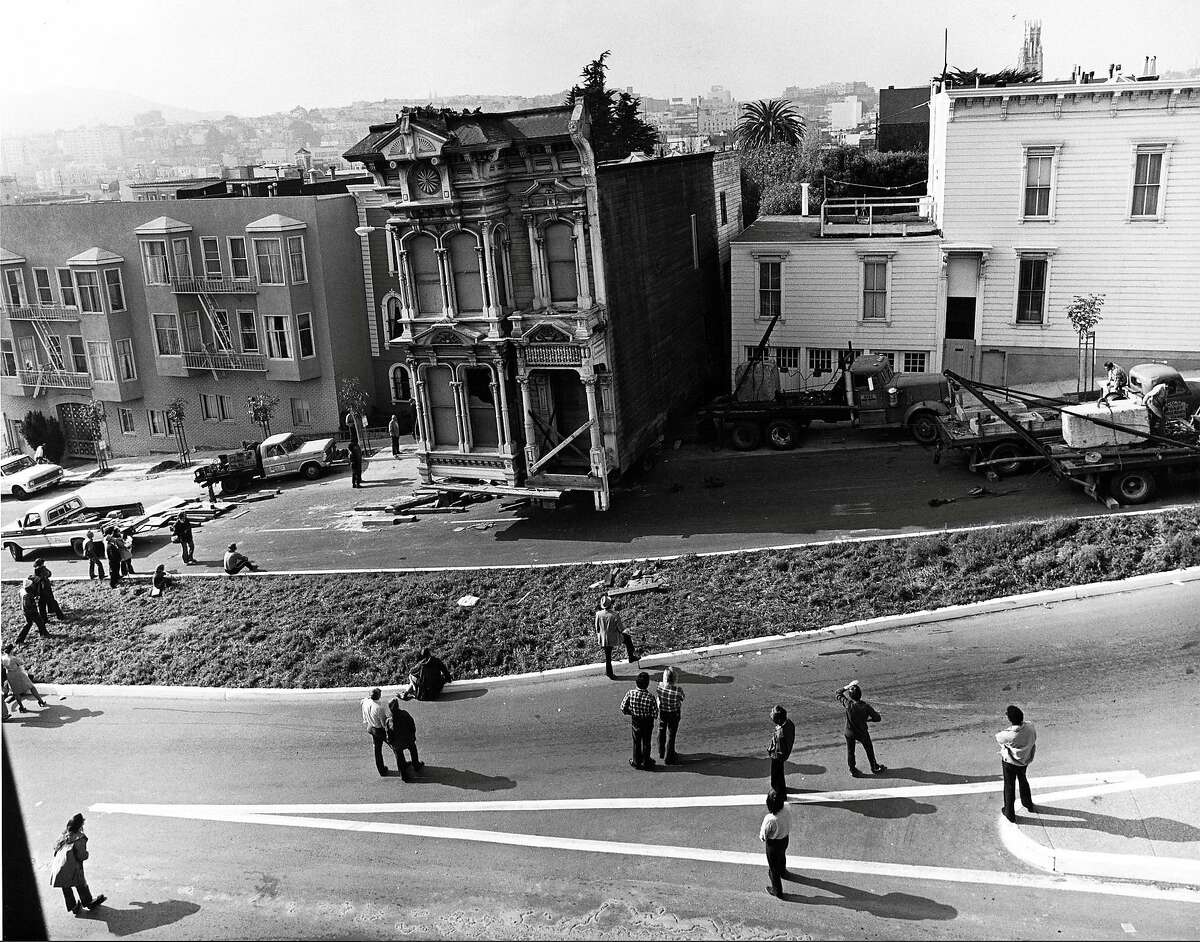 Vollmer House, one of 12 houses to be demolished in the 1970s, was saved through the efforts of the San Francisco Heritage.Heritage archive

The San Francisco Heritage nonprofit group began saving the Victorians. Starting in 1971, with the redevelopment of blocks in San Francisco around Franklin and Turk streets, including what is now Opera Plaza, the group identified and rescued 12 historic homes – and found new homes across the city.

Most were beautiful buildings that needed some maintenance. The most noticeable and biggest problem, however, was the tall, narrow, and ornate Vollmer house at 773 Turk Street – close enough to the 139-year-old Victorian who had moved that weekend to borrow a cup of sugar.

Vollmer House traveled 11 hilly blocks in 1974 and several inches were shaved off the side before fitting into its new home at 1735 Webster Street. (For years the house was featured on S. F. Heritage's letterhead.) 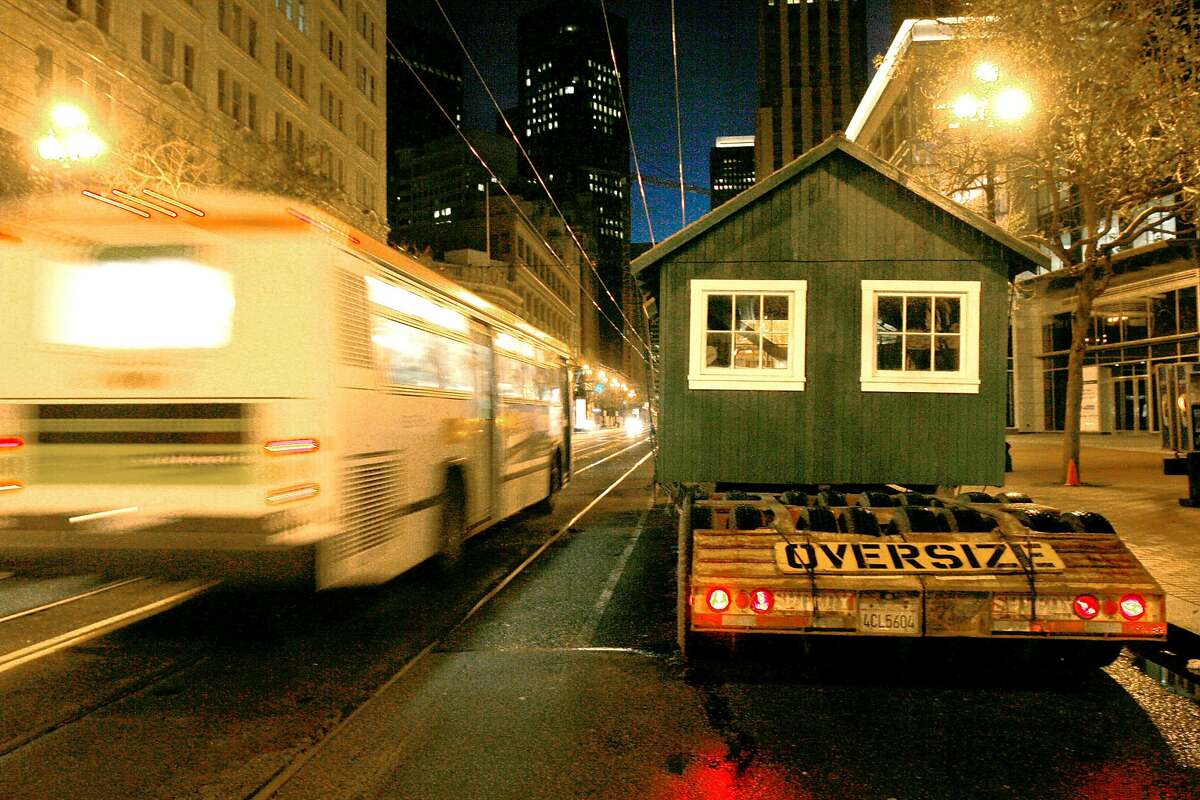 The Western Neighborhoods Project also has a genesis story that includes an ambitious move saving four of the remaining earthquake refugee huts that were built after the 1906 earthquake and fires.

Once more than 5,500 refugee camp huts were built in Golden Gate Park, Dolores Park, Washington Square, and other parks. Most were carted around the Bay Area in 1907, often combining several huts and adding more structures until the original huts were unrecognizable.

In 2002 the Western Neighborhoods Project was formed to preserve some of the remaining cottages on Kirkham Street and organize one on Market Street for the 100th anniversary of the earthquake. This cabin is now on display at the San Francisco Zoo. Two more have been restored at the Fifth Avenue Institute in Oakland. And the organization continues to find new earthquake shelters in the Bay Area. 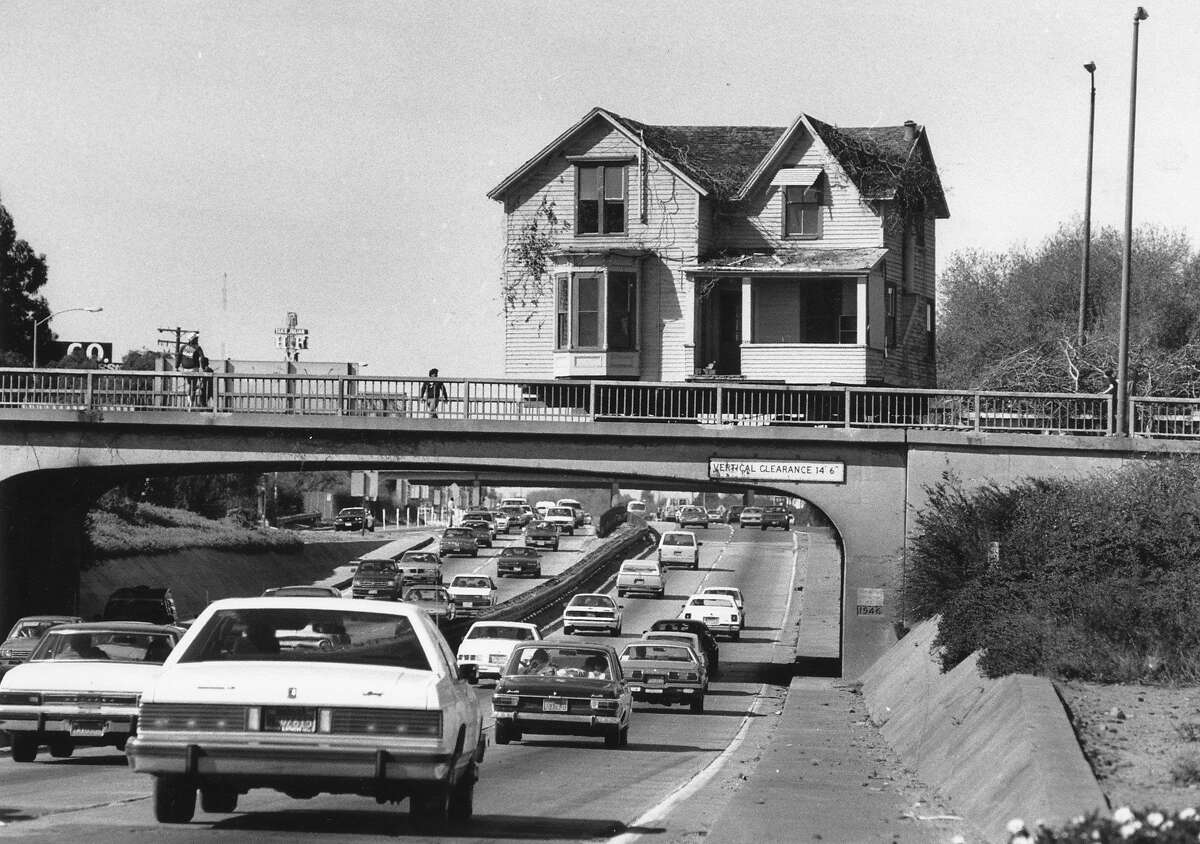 February 2, 1987: Two houses move from downtown San Jose to the San Jose Historical Museum. They had to use flyovers because they were too big to fit under Interstate 680.Ken Cavalli / The Chronicle

The old St. Patrick's Church on Eddy Street in San Francisco has been relocated twice since it was replaced by the Palace Hotel in the 19th century. Today it is one of the oldest buildings in the city. The old beach chalet was converted into a scout headquarters in 1925.

Impressive movements have also taken place outside the city. In 1987, San Jose moved several old homes, including some over a freeway overpass, to form a historic neighborhood in Kelley Park.